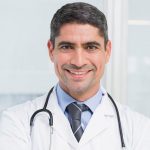 As a surgeon for Reconstructive surgery department, Phil deals a lot with people on the brink of desperation… Nevertheless, he just loves to see his patients smile again, as soon as they can see their restored body after the surgery and recovery are over!

Initially a neurosurgeon, Phil practiced plastic surgery as well, which combined gave him a unique perspective and a great expertise. Ultimately it booked him a place as the head of our surgery department.

Phil is the head of our Surgery department. He practices at our clinic since its initial founding days, 25 years ago.